Why were they selected? Well, I liked the idea of using a set of interrelated images of systems and organisations on the site (and perhaps to rotate a variety of image sets on a regular basis). I enjoy art and science as sources of inspiration / instructive case examples and metaphors, so polar images I had taken myself were an obvious place to begin.

The associations that these images surface for me are about the temporary, intimate organisation that is formed by people on small ships who like adventure travel in wilderness regions. That is – The cohorts (crew, expedition staff and passengers) that need to work together to make the voyage a success. – The uniforms, the regimentation of time, the rapid formation of teams and relationships, the contrivance of an expedition. – The politics, envy and jostling over who is the most seasoned polar traveller, and who has the biggest camera. – The people who aren’t bothered by any of that. – The breaking of bread during shared meals. – The storming and the stand offs. – The ultimate disbandment and good faith promises to stay in touch that may or may not be kept. We can see all sorts of systems and organisations in these images. Enjoy.

Zodiac full of people with their eye out for wildlife and icebergs. 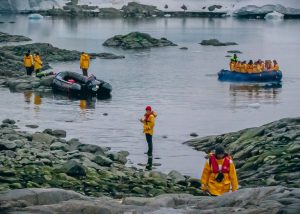 When travelling by sea in the polar regions, you are part of a new, temporary organisation each time you go ashore. It’s like being in a team of self managed teams.

The Walrus Photography Project. Adults and juveniles piled atop one another; the only animals in the North that the Polar Bear won’t take (big tusks).

Kayaking in the bay, sharing the waters with Minke whales.